Modern technology has brought wondrous improvements to our lives, but in some cases it does humanity a disservice. Take for example the sad plight of the neglected and misunderstood apostrophe, victimized by so-called smart quotes.

This injustice came about because quotation marks take on different shapes depending on whether they’re opening (“) or closing (”). Both were represented on old-timey typewriters by all-purpose straight quotes, also known as inch marks. Nowadays our keyboards still have that single key, but we rely on software to auto-replace straight quotes into proper “curly” quotation marks. The context-sensitive smart quotes feature detects adjacent spaces to deduce whether opening or closing quotes are called for.

This automated practice works out well in the correct rendering of quotation marks, applying to standard double quotation marks as well as the less common single quotation marks. But the problem is, an innocent bystander got caught up in this typographical shuffle: our friend the apostrophe.

Despite their resemblance and shared spot on the keyboard, the apostrophe is not the same thing as the single quotation mark. They are two entirely different punctuation symbols. Single quotes are limited to one real function in written U.S. English, which is to indicate a quotation within a quotation. Apostrophes, on the other hand, are used to denote possessive form and to indicate omission.

But – and this is the crucial point for this discussion – the apostrophe does not change. It has one form, which coincides with the appearance of the closing single quotation mark, shaped like a 9 (’). There is never, ever any circumstance under which the apostrophe should have the 6-shaped form of the opening single quotation mark. Apostrophes are like the balladeer in “Free Bird” – Lord knows they can’t change.

Unfortunately, the indiscriminate terror known as smart quotes does not recognize this basic truth of punctuation. Most apostrophes appear in the middle of a word, so the auto-correction safely renders them as closing single quotation mark. But when an apostrophe comes at the start of a word, we’ve got serious trouble.

You’ll see this apostrophe abuse in the abbreviation of years, like the ‘96 campaign or the ‘80s. Or with certain contractions, as in Give ‘em hell. Smart quotes logic anticipates that we’re starting off a phrase enclosed in single quotes, but we’re not – we’re indicating an omission. So smart quotes gets it wrong. To lead off a word with a real apostrophe, you either have to know the obscure key command to produce it (option-shift-right bracket?), or outsmart your smart quotes by typing two apostrophes and carefully deleting the erroneous first one.

It’s ironic that we have to put so much effort into writing a punctuation mark that was never supposed to change its shape in the first place. And it can be a pain to keep up with. But until the apostrophe gets its own key on the keyboard, away from those rowdy quotation marks, we’ll just have to manage. To help make it easier to recognize the damage wrought by smart quotes, I have coined my own rhyming mnemonic device, Trull’s Law of Apostrophes: 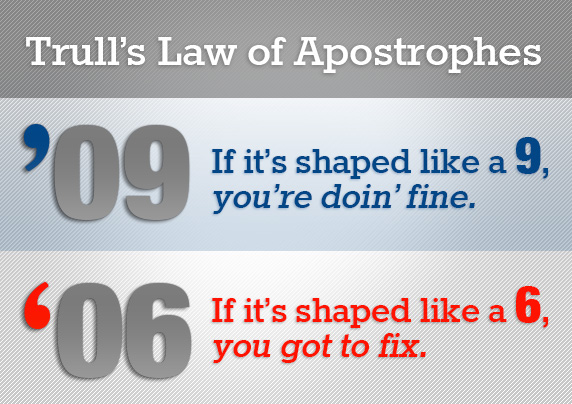 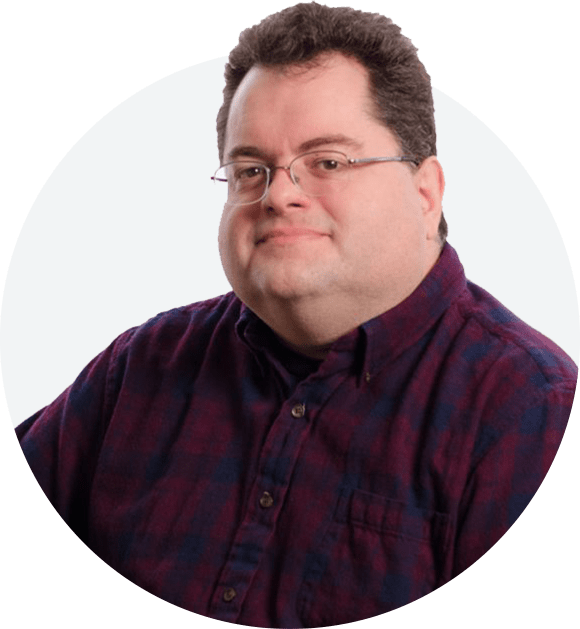 Donald offers our clients nearly two decades of experience crafting effective written content for a wide variety of international clients. He contributes creative campaign concepting, original copy development and editorial management to deliver professional and polished verbal communications. He is also the master of the tagline. Donald has won numerous Triangle ADDY Awards, including the best overall copy award in 2009. His writing has earned praise online in the fields of humor and film criticism.